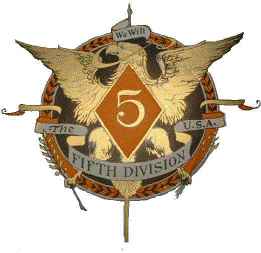 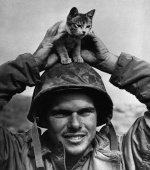 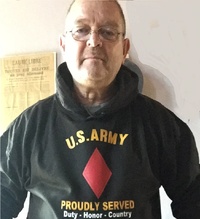 Rain was sacking into County Down, North Ireland, as usual, on the 2nd of July, 1944, when the majority of Red Diamond troops were informed that they were "sealed off" from the civilians and restricted to camp and billet, under secret departure orders. And it was raining, as usual, as the division converged on the harbor at Belfast by train and truck and embarked, on personnel and motor transports for an unknown shore. For division veterans, it was the fourth time in three years they had boarded gangplanks to shout their first names and serial numbers to answer to the call of their last names from passenger lists. They had boarded at Brooklyn of Boston for Iceland, at Reykjavik for England, at Cardiff for North Ireland in previous gangplanking. But this time they told each other "this is it, I may have gotten on a ship before but this time I get off on the battleground.
This is it.

It was. The division transports joined a large convoy that moved slowly southward through the Irish sea into the English Channel and to the coast of France, at Ste Mere Eglise. The beachhead had been won 33 days before, on June 6, and its price was reflected in the hulk of shipping that littered the approach to the beach. A fine mist filled the air the late afternoon of 9 July as troops clambered down the side of transports by cargo nets into Landing Craft, Tanks and Landing Craft Vehicles, personnel dressed in full field equipment, plus duffel bag. A very few troops waded ashore through two and three foot deep water from landing craft but the rest were disgorged from craft onto a steel ramp that fingered a hundred yards out to sea from the shore, and then walked ashore with full field and duffel bag. Troops hit the dune line of Utah Sugar Red Beach, dropped duffel bags and walked five miles to Transit Area B that night, starting out at daylight again to march early twenty miles to the division concentration area near Montebourg. The first impression of France was that it was hot, and full of shall-shattered towns, dead cows and signs everywhere that said "mines cleared to hedges" or "mines cleared to edge of road". A heavy, fetid smell was in the air, artillery rumble in the distance, planes were overhead constantly and it didn't take long for everyone to get the idea, neverthereafter forgotten, that a clean rifle and a good foxhole were the most important thing to see to before bivouacking for the night.

On landing, the division had been assigned to First Army and on the 11th was further assigned to V Corps. Orders were received 12 July for the 5th Division to relieve the veteran 1st Division in the lines in the Caumont sector. Relief, part of which was performed under artillery shelling by the Germans, was accomplished by 1500 hours 14 July.

Caumont was the southernmost salient of the beachhead and the left flank of the First Army. The British 11th Armored Division was on the left and the 2nd Infantry Division on the right. Caumont was a ten-day period of battle inoculation against the roughest outfits in the German army, the 3rd and 5th Parachute Divisions. Shelling was constant by both sides, as was patrolling activity. The remnants of the German air force also made nightly reconnaissances and bombings and strafings. On the left the British and the Germans were engaged in a terrific battle for Caen, with incessant artillery duels that kept the night times constantly aglow. On the right, the 2nd Infantry Division was slugging toe to toe with the Whermacht for St Lo.

Caumont was typical hedgerow country. Tall hedgerows and trees bordered small fields and there were many sunken roads which provided covered approaches under artillery fire but turned into mudholes when it rained.

On 23 July, the British took over the Caumont sector, the 15th Scottish Infantry Division relieving the 5th. After which the division, less the 2nd Infantry Combat Team and Division Artillery and attachments, moved to an assembly area, in vicinity of Cerisy la Foret. The 2nd Combat Team, supported by a fire support group from the 10th Infantry remained in position preparing for an attack to straighten out the first Army's line. Thus the men of the 2nd Infantry saw the toughest hedgerow fighting in the beachhead of the division troops.